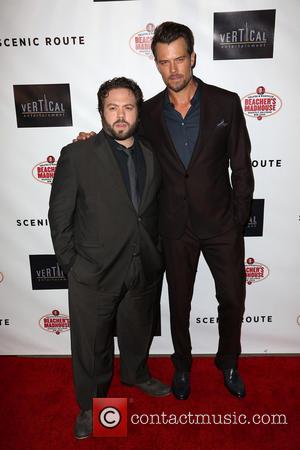 Poor old Josh Duhamel. He's the Hollywood hunk husband of Stacy Ferguson with a credits list that ranges from average to truly and inexplicably awful. But there's a light at the end of the tunnel for old Josh, it's called Scenic Route.

Duhamel's past few years in film haven't been good to him. Actually, they've probably been rather good to him financially, with a slurry of fluffy rom-coms and bad comedies ripped apart by critics, though guzzled down by the cinema-going masses. There was Safe Haven, with Julianne Hough. There was Transformers: Dark of the Moon. Or how about Movie 43?

The latter was a film that Mark Kermode commented, "[To say Movie 43] wasn't funny was a staggering understatement. But much worse it was something far creepier than not funny, it was a film that actually made you suspect there was a conspiracy involved to get all these people in this movie," adding, "The problem wasn't reviewing it, the problem was simply how to describe it without overstepping the lines of taste and decency." There was also New Year's Eve, Life As We Know It and others.

But Scenic Route, Duhamel's latest movie by directors Kevin and Michael Goetz, is his best movie to date. He plays Mitchell, who heads out on a road trip with his life-long friend Carter (Dan Fogler). When their old pickup breaks down, the pair are stranded on an isolated desert road, and, in time, they begin to attack each other's life decisions. Mitchell and Carter begin to question who they are and who they could have been, which eventually leads to knife-wielding madness.

"The movie becomes a survival tale and is more successful in its grueling, slightly crazed second half," said John DeFore of the Hollywood Reporter.

"Scenic Route is a movie that crawls under your skin and stays there for a while, thanks largely in part to its haunting ending," wrote Aly Senigran of Hollywood.com, continuing the praise.

"When Scenic Route works it really works, and it's definitely a trip worth taking," said Joshua Starnes of ComingSoon.net.

"The howl of the desert wind and the unflagging hammer of the sun are the backdrop for every bad decision, lending them a plausibility they wouldn't have in comfort," wrote Ron Staeger of the Village Voice.

However, it was Kevin Kelly of Film School Rejects who was on the money, writing, "This script, by Kyle Killen, and direction from brothers Kevin and Michael Goetz have resulted in a very powerful film that you should see with your best friend. Then take a road trip together. You both might need it."

Scenic Route, which premiered at the 2013 South by Southwest Film Festival, will be released on Friday August 23, 2013.