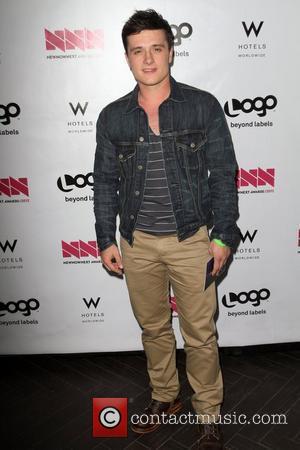 The Hunger Games star Josh Hutcherson says he and co-star Jennifer Lawrence are ready to do battle with Kristen Stewart and Robert Pattinson for the 'Best Kiss' gong at the 2012 MTV Movie Awards.

Speaking at the NewNowNext Awards on April 8 2012, Josh was asked by VH1 if he thought The Hunger Games had a chance of winning the golden popcorn statuette for Best Kiss, even though Pattinson and his girlfriend are the big favorites once again, he said, "[Rob and Kristen's] was so passionate.Ours was like - I was on my deathbed, wasn't very sexy. I don't know, we'll see. Maybe. I'd be so lucky. One can only hope!". The Hunger Games raked in around $33.5 million over the weekend to see off its latest box-office rivals 'Titanic 3D' and 'American Reunion'. This week will see the release of Guy Pearce's action-drama 'Lockout', though its Joss Whedon's horror flick 'The Cabin in the Woods' that is most likely to take The Hunger Games' crown.

The 2012 MTV Movie Awards will air live from the Gibson Amphitheatre in Universal City, California on June 3, 2012. Kristen Stewart and Robert Pattinson have won Best Kiss for the past three years, though the award is synonymous with Tobey Maguire and Kirsten Dunst's memorable embrace in Spider-Man back in 2003.