Josh Kumra has come a long way in the last 6 years. A product of the fertile Swindon music scene, as a teenager he used to record acoustic session tracks for a live music show I used to co-host at a local radio station. By 2011, he'd relocated to London, a move that paid off with a co-writing and vocal credit on Wretch 32's number one single 'Don't Go'. Now in 2013, Josh has the opportunity to take to the spotlight himself with the release of debut album Good Things Come To Those Who Don't Wait. It's a confident and polished introduction to an artist who has a great Pop sensibility in his song writing. 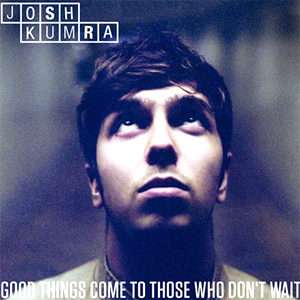 What's immediately obvious is that, despite his age, Josh has been perfecting a very mature outlook on the world. He seamlessly slips into world-weary Blues and Gospel numbers without missing a beat. Yet when he needs to shift gears into being a fully-fledged Pop performer he pulls that off too. While it's pretty obvious that he's been taking notes while listening to the likes of Ray LaMontagne, to have found a voice beyond his years so early in his career can only be a good sign.

While Josh isn't an entirely new artist to me, the eclectic nature of the album was a very pleasant surprise. New single 'The Answer' opens the record with its laid back Pop vibe and string-backed choruses. The first four tracks predominantly follow the same formula with a flourish of R&B thrown in for his solo reworking of the aforementioned 'Don't Go'. But the standout track on the record 'Find My Way Home' then reveals an entirely new side of Josh as the album starts to find its feet. The song is all handclaps and Gospel choirs with a soulful lead vocal that makes you sit up and take notice. The contemplative and soothing 'Brave Face' follows it with mournful lyrics ("I see the hurt in your eyes again, your brave face can't hide the pain".) and Blues guitars. By this point it's clear that the album isn't trying to capitalise on the success that Josh has already enjoyed by playing it safe, instead it's willing to play to his strengths including his distinctive voice.