Mexican Singer Juan Gabriel Has Hit His Former Manager With A Lawsuit For Allegedly Keeping Over $5 Million (£3.1 Million) Of An Inheritance The Star Was Left By His Late Friend Eight Years Ago. 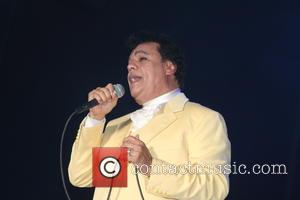 The veteran crooner and businessman Roberto Sada Salinas had been best friends for nearly 20 years, and after Sada Salinas passed away in 2007, he reportedly left Gabriel $5 million, as well as his New York City penthouse, worth $900,000 (£562,500).

Gabriel's then-manager Eugenio Martinez Benavides was in charge of the singer's funds at the time, and now the singer claims his former associate has kept the massive cash gift to himself.

Gabriel filed the legal documents in a Monterrey, Mexico courthouse last month (Jun15), but Benavides has fired back, claiming his former client declined the inheritance.

The case is ongoing.

Juan Gabriel Hoping To Be Back On Stage In May