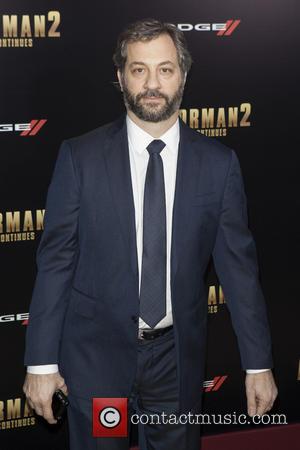 Filmmaker Judd Apatow jumped to actress Lena Dunham's defence on Thursday (09Jan14) and chastised a male reporter after he questioned the need for her frequent nudity in hit Tv series Girls.

The pair was taking part in a panel discussion for the show at the Television Critics Association press tour in Pasadena, California on Thursday, when Girls creator and star Dunham found herself being quizzed about getting naked onscreen.

The journalist asked, "I don't get the purpose of all the nudity on the show, by you, particularly. I feel like I'm walking into a trap where you go, 'Nobody complains about the nudity on Game of Thrones, but I get why they're doing it.' They are doing it to be salacious and, you know, to titillate people. And your character is often naked just at random times for no reason."

Dunham, who plays Hannah Horvath on the drama, took the comments in her stride and responded, "It's a realistic expression of what it's like to be alive, I think, and I totally get it. If you're not into me, that's your problem, and you're going to have to kind of work that out with whatever professionals (therapists) you've hired."

However, Apatow, who serves as an executive producer on the show, became angered by the unprovoked attack and hit out at the reporter, saying, "That was a very clumsily-stated question that's offensive on its face, and you should read it and discuss it with other people how you did that. It's very offensive."