Actress Rosanna Arquette's Daughter Zoe Bleu Has Revealed She Was Sexually Abused For Years When She Was A Young Girl. 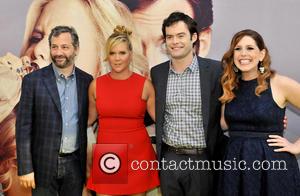 Prior to The Rape Foundation's Annual Brunch in Beverly Hills, California on Sunday (04Oct15), which she attended with her mum, Zoe, 20, revealed to the media she was there to connect with other rape survivors.

Taken aback by her daughter's candid admission, Rosanna grew emotional and praised Zoe for being open about her ordeal for the first time.

"It's in the the world now," the Pulp Fiction actress said with tears in her eyes, "and that's what is incredible - the healing starts when you own your own power and you're able to speak out... She's so courageous and incredible. I am so inspired by my daughter every day for her courage. This is one of my heroes."

Zoe, Rosanna's only daughter with her ex-husband, music industry agent John Sidel, tells Access Hollywood she was raped between the ages of 11 and 13, but did not tell her mum until two years ago.

When asked why she decided to open up about her experience now, Zoe said, "It's important to take your power back. I've witnessed a lot of people destroy their lives because they haven't felt the courage or haven't felt their worth. I felt it myself for a little while, and I've met people who have overcome it, so here I am."

The organisation's brunch was hosted by former Friends star David Schwimmer, and filmmaker Judd Apatow was honoured for his vocal opposition against embattled comedian Bill Cosby, who stands accused of sexually assaulting more than 50 women.