Jude Law's Ex-girlfriend Has Declared The Actor A "Good Dad" To His Newborn Daughter, And Revealed He Was "Really Amazing" While She Was In The Hospital. 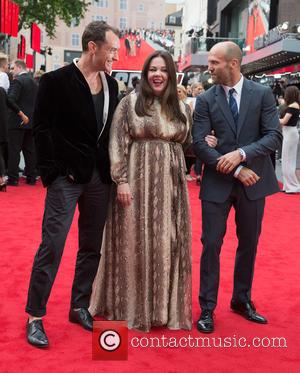 Singer Catherine Harding, who gave birth to Law's fifth child after falling pregnant during a brief romance last year (14), has spoken out for the first time about her relationship with the Alfie star and their 10-week-old daughter.

Harding has revealed that Law is a hands-on father and has even introduced his little girl to her brothers and sisters.

She tells Britain's Daily Mirror newspaper, "She looks like Jude massively, she doesn't look like me. Jude is really funny and sweet... He is a good dad and she sees her brothers and sisters. He takes her out all the time...

"The birth was really painful... it was a C-section, it was really horrible. But he came straight after and was really amazing."

Harding also reveals the former couple dated for more than six months, but there is no chance of them getting back together, adding, "It was said it was seven weeks but it was more like seven months. We are friends now but we're not going to get back together. We met at a bar in Soho and hit it off. I didn't plan to have a baby. It just happened. It's so exciting being a mum."

Law also has a five-year-old daughter, Sophia, from a brief romance with model Samantha Burke, and three children with his ex-wife Sadie Frost.