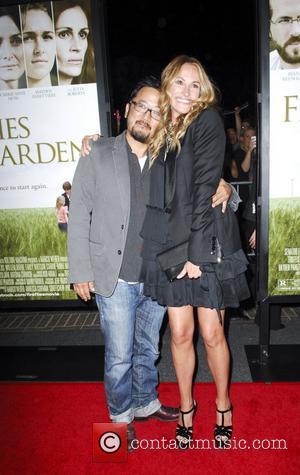 Picture: Dennis Lee, Julia Roberts The Premiere of 'Fireflies In The Garden' held at the Pacific Theater at the Grove - Arrivals Los Angeles, California...

Julia Roberts has Cate Blanchett to thank for her close friendship with director Mike Nichols - because the Notting Hill star was only cast in 2004 movie Closer when the Aussie actress became pregnant and pulled out of the project.
The romantic drama, which co-starred Natalie Portman, Jude Law and Clive Owen, was Roberts and Nichols' first film collaboration - and they went on to work their movie magic once again in 2007's Charlie Wilson's War.
Roberts admits she would never have struck up a friendship with the director/actor had it not been for Blanchett's perfectly-timed pregnancy.
In a joint interview with Vanity Fair magazine, the actress says, "I owe it all to Cate Blanchett... She had been cast in Closer and got pregnant and then couldn't be in it. So I owe a great debt to her."
But Nichols never expected Roberts to sign on to the project, about two cheating couples, because she was known for her status as a leading lady.
He confesses, "I hadn't dreamed that you would consider it, because there were four equal roles in the movie, and I didn't know you were willing to be part of a group thing."
Roberts insists working with Nichols on Closer was a whole new experience for her - and it's one she truly treasures.
She adds, "I think what I liked the most about working with Mike and being friends with Mike is that he's the most plainspoken and the most encouraging person I've ever met in my life. Those two things are like milk and honey to me. I think back on (sic) that movie so fondly. I remember the night that movie premiered because I was in the hospital on bed rest, pregnant as a house, and Mike came to see me on the way to the big premiere. It was so sweet."
And Roberts reveals the 80 year old has become somewhat of a father figure to her.
She tells Nichols, "My father died when I was nine years old. Mike, I am so beholden to our relationship. You really are a father to me."