Julian Casablancas - I Wish It Was Christmas Today Single Review

Review of Julian Casablancas single I Wish It Was Christmas Today 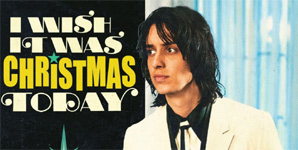 As it is the festive season it seems only fitting that we celebrate the life of one JC. No not Johnny Cash, Jimmy Cliff, Joe Cocker, Jackie Chan or even Jackie Collins, but, the one the only, Mr Julian Casablancas. The front man of The Strokes, the man who penned the album atop of so many polls to find the best album of the last decade ('Is This It?'), the rich kid from NYC, the cliched, some time kitsch, leather jacket donning Velvet Underground loving voice of a band that some say dragged the direction of Rock/Pop thankfully clear of it's more pompous/contrived and faux intellectual meanderings.

So, now at the tender age of 31, JC, has released a critically acclaimed solo album, 'Phrazes For The Young', embarked on a solo tour, confirmed that he and his aforementioned band will headline at next years Isle Of White Festival, and..................... decided to do a cover version of Saturday Night Live's 'I Wish It Were Christmas Today'. The latter to me is somewhere close in scale to being a musical oddity equivalent to the huge Regency folly that is Brighton Royal Pavilion. (Lauren Laverne says "He is the most unlikely person to release a Christmas single"). JC is not on a downward spiral, not in need of exposure and doesn't need a change or shift in direction to rejuvenate his career. Why then? Well, why not? Fair play to Julian he's put perception, and possible parody, aside and put himself out there to give an air of cool credibility and fresh unpredictability to our frankly tragic festive chart offerings. (JC probably did not count on Rage Against The Machine whilst he was masterminding his assault on the charts).

According to Zane Lowe it's "easily the best Christmas related song this season". That may be a given as the competition from the likes of Terry Wogan and Rolf Harris is unlikely to have met with much pleasure from our antipodean cousin. (Laura Marling may disagree with him though). As it is the season to be jolly, a time for giving and rejoicing in life's rich tapestry let us commend JC's laudable festive frivolity. Doing his best Dean Martin impression on the CD sleeve, Julian has gone all out to capture the flavour and essence of the Christmas spirit. He's certainly not skimped on the sleigh bells during this 3 minute joyous belter. Julian sounds almost giddy with excitement delivering a clearly enthusiastic and pacey performance. It's essentially The Strokes with Santa hats on. They're having a rare old time, there's guitars and drums aplenty and a definite and almost tangible happy/fun feel to be had here. Lap it up, it's good for your soul.

A modern day vintage and a staple of the air waves for many a year to come no doubt. Already being 'made' to play it by his band each night of his current tour will Mr Casablanca's be giving such a rousing version when asked to do so in another 5 years from now? (Me thinks not). For now let us not forget that JC, who has no carpentry skills that I'm aware of, has knocked together a minor musical miracle. Praise be....