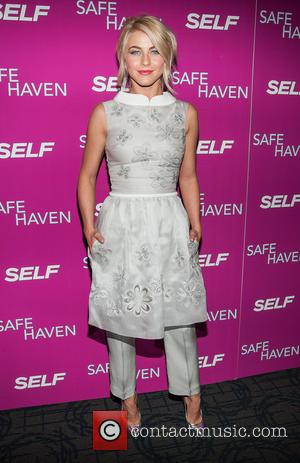 Julianne Hough caused a stir at the New York premiere of her latest movie Safe Haven, by opting for a dress-over-pants look, possibly inspired by a similar ensemble sported by Emma Watson not so long ago. 24 year-old Hough wore a grey dress, embroidered with flowers and with a white, 1960s-style collar, over grey trousers and with shiny silver heels. It was an attractive outfit, though perhaps an unexpectedly tame choice for an actress in her early 20s. According to the Daily Mail, Hough explained that the outfit had been “inspired by India.” Hough was joined at the NYC premiere by her co-star in the movie, Josh Duhamel. Josh decided to play it safe with a simple black suit and tie, leaving all the attention to be drawn to Julianne’s wardrobe choice for the evening. Julianne Hough and Josh Duhamel at the premiere for Safe Haven

Safe Haven is a romantic drama, in which Julianne plays a young woman (Katie), reluctant to allow herself to become close to an admirer, Alex, played by Josh. Slowly, the reasons behind her reluctance start to become evident as Katie’s past begins to catch up with her. The movie is adapted from a Nicholas Sparks novel, the author behind other movie-inspiring books such as The Notebook (starring Ryan Gosling) and Dear John (starring Channing Tatum). Josh insists that this movie is different to previous Sparks adaptations and is trying to avoid the inevitable comparisons to Gosling and Tatum. “”I’m trying not to think about [it],” he said. “I’m trying not to compare my performance to anybody else.” Safe Haven is due for release later this week.

Watch the trailer for Safe Haven