Julianne Moore, Gwyneth Paltrow, And Will Ferrell Were Among The Big Names Who Joined Forces To Help Raise Money For America's Inaugural Red Nose Day Telethon On Thursday Night (21may15). 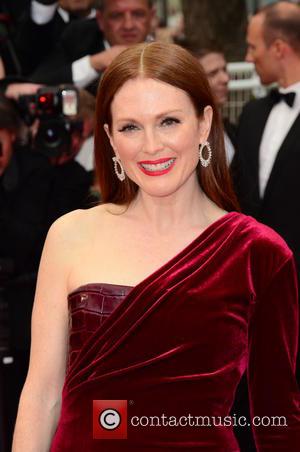 Picture: Julianne Moore - A host of stars were snapped as they took to the red carpet for the 68th Annual Cannes Film Festival and the...

A host of celebrities gave their time and effort in support of the three-hour telecast, which will benefit 12 charity organisations fighting poverty in the U.S., Africa, Asia and Latin America.

The event has been a staple in the U.K. for the past three decades as part of the nation's annual Comic Relief charity push - raising more than $1 billion since its inception in 1988 - but Thursday's event was the first of its kind in the U.S.

Throughout the night, more skits were presented, featuring funnymen Ferrell and Nick Offerman facing off on TV talent show The Voice: Charity Appeal edition. Vying to become the best "at charity", the men hoped to win over judges Adam Levine, Christina Aguilera, Blake Shelton, and Pharrell Williams with their pleas for donations.

Comedian Billy Eichner took his popular Billy on the Street series out in public with Martin Short, Pitch Perfect 2 stars Elizabeth Banks and John Michael Higgins reprised their roles as a cappella commentators to provide colour for the telethon, and Coldplay debuted their latest project, a Game of Thrones musical.

The night also featured performances by U2, Ed Sheeran, and John Mellencamp and Keith Urban, while other stars including Olivia Wilde, Christian Slater, Kellan Lutz, Josh Groban, and Elisabeth Moss also took to the stage to show their support.

A number of female stars, including Anna Kendrick, Leslie Mann, and January Jones appeared in a segment which imagined them in films originally starring Hollywood's top male actors.

The event was co-hosted by Meyers, David Duchovny and Jane Krakowski, and halfway through the show, an early tally showed a total of $10.7 million (£6.7 million) raised for charity.