Julianne Moore Finally Received Her 2014 Best Actress Award As She Returned To The Cannes Film Festival In France On Wednesday (13may15). 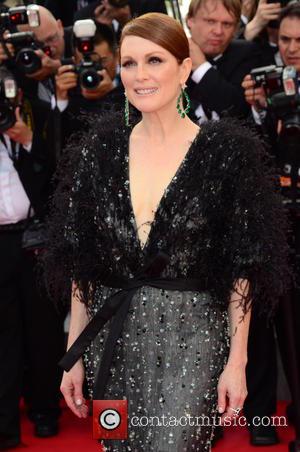 Picture: Julianne Moore - A host of movie stars were snapped on the red carpet as they attended the 68th Annual Cannes Film Festival Opening Ceremony...

The Oscar winner attended the industry event for a week last year (14) but flew back to the U.S. before she was named Best Actress at the festival's award ceremony for her role in Maps to the Stars.

Moore joined actresses including Naomi Watts, Lupita Nyong'o and Natalie Portman on the red carpet on Wednesday to officially kick off this year's (15) event and she was later called onstage during the opening ceremony to finally pick up her mini Palme D'Or prize a year after her win.