Julianne Moore will be honoured with the Hasty Pudding Woman of the Year award by Harvard University next week. 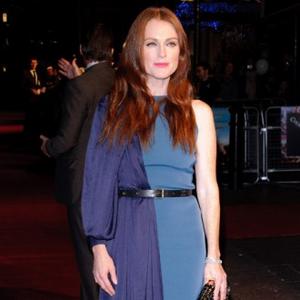 Julianne Moore is to be honoured by Harvard University.

The 50-year-old actress will be named as Hasty Pudding's Woman of the Year next week (27.01.11), in a ceremony where she will have to lead a parade through the streets surrounding the prestigious Massachusetts college.

The legendary award is given by the Hasty Pudding Theatrical Group - America's oldest undergraduate drama club - to entertainers who have made a "lasting and impressive contribution to the world of entertainment".

Hasty Pudding spokesperson Learah T. Lockhart said the group were "very excited" about honouring the 'Kids Are All Right' actress.

She explained: "Julianne Moore has made a lot of bold choices in her career. She has acted in everything from movies to independent films to theatre to television. She has even authored two children's books."

Learah added the organisation was also impressed by the actress' academic achievements as she is a graduate of Boston University's College of the Fine Arts.

Anne Hathaway was the 2010 Woman of the Year, while other previous honourees include Renee Zellweger, Meryl Streep, Katharine Hepburn, Julia Roberts, Jodie Foster, and Elizabeth Taylor.

The group also selects a Man of the Year. This year's recipient will be announced next week, with the event held on February 4.