Julianne Moore To Star In Carrie

Julianne Moore is said to be in talks to appear in the forthcoming 'Carrie' remake with Chloe Moretz. 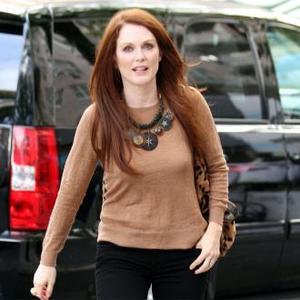 Julianne Moore is to join the cast of the 'Carrie' remake.

'Kick-Ass' actress Chloe Moretz is already on board to portray the titular lead character - a bullied schoolgirl who discovers she has psychic powers and uses them to wreak disaster on her hometown - while 'The Kids Are Alright' star Julianne is in line to play her abusive, fundamentalist Christian mother Margaret.

According to website Bloody Disgusting, studio Columbia have been ''speaking closely'' to Julianne about taking on the role, which Jodie Foster was previously linked with.

'Carrie' - which is adapted from the novel by Stephen King - will be directed by 'Boys Don't Cry' filmmaker Kimberly Peirce.

In 1976, Sissy Spacek starred in the first film version of 'Carrie' opposite Piper Laurie as her mother, with Brian De Palma at the helm.

The new movie is described as being ''less a remake of the De Palma film and more a re-adaptation of the original text''.

It is scheduled for release in the US in March 2013.