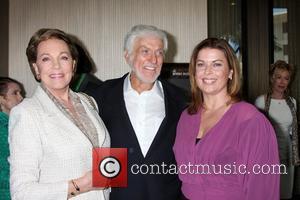 Beloved actress Julie Andrews has applauded casting bosses for landing Tom Hanks as Walt Disney in a new film about the making of Mary Poppins - because the Oscar winner personifies what was special about the movie mogul.
Andrews, who played the title character in the Disney film, loves the idea of Hanks portraying her film boss in the retelling of the 20-year battle to secure the rights to turn author P.L. Travers' book into a movie musical.
The actress tells the Los Angeles Times, "I can see that would be great... Disney had that little twinkle in his eye, and he was hugely smart and a little fatherly in some ways. I think Hanks would be wonderful in that."
And she admits she'll be keeping a close eye of the development of the film - because she was such a big part of the story.
Andrews adds, "It'll be interesting to see what they tell and how they tell it."