Actress Julie Bowen Is Offering Support To Her Modern Family Co-star Sofia Vergara, Insisting The Latin Beauty "Will Be Perfectly Fine", Despite Shocking Claims Made By Her Ex-fiance This Week (Ends17apr15). 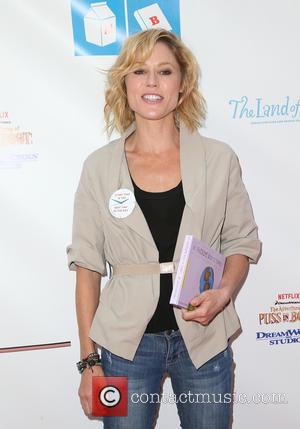 Vergara is currently embroiled in a nasty battle with her former boyfriend Nick Loeb over allegations she wants to destroy two cryopreserved female embryos the couple created while engaged.

The 42-year-old's attorney, Fred Silberberg, has dismissed Loeb's claims, deeming them "uncredible" and without "merit," while Bowen reveals Vergara is shocked by the allegations.

She says, "She is one of the kindest, best people I know. I am so sad that on the eve of all of her great happiness that had to happen, but at the same time, I know that she will be perfectly fine. She is a wonderful person. She's such a good person."

She adds, "I mean she's sort of amazed. I think she's a bit shocked because it kind of came out of nowhere. But she's a great person. And she's with a great guy... now. That's what I have to say about that."

'Modern Family' get stuck in elevator