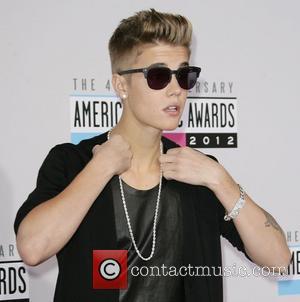 Big Week For Biebs: It's been a rollercoaster seven days for Justin Bieber. First, it was reported that he'd split from long-time girlfriend Selena Gomez, then, he attended the American Music Awards with his mother where he won three awards, and lastly, he met up with his ex-girlfriend to chat about a reconciliation. Keep up Bieber fans!

Crash Landing: Unless you've been living under a rock for the past week, you've probably heard of Rihanna's controversial 777 tour. Seven gigs, seven cities, seven nights, on a Boeing 777. She invited a ton of journalists along for the ride, and provided the alcohol, though not everything went to plan as RiRi opted to take the partying easy to preserve her voice. However, after all the drama, the sold-out shows seemed to go down pretty well with Rihanna's fans. Looking Good Lindsay! Is the Lindsay Lohan comeback finally complete? Well, it's been an up-and-down year for the actress, though she's finishing 2012 in true style. Just this week, she appeared at the premiere of her new television move Liz & Dick looking really rather radiant!

Street Fighting Woman: It was great to see Noomi Rapace doing her thing in the video for the latest Rolling Stones' single Doom and Gloom this week. The 'Girl With The Dragon Tattoo' star battles zombies, smokes some cigarettes, rolls around and dances like Jagger. Rock N Roll!

Bride Biel Gets It Right: It was newlywed Jessica Biel who stole the show at the Hitchcock premiere in California this week. Mrs Justin Timberlake wore a stunning Gucci gown to the glitzy event at the Academy of Motion Picture Arts and Sciences in Beverly Hills. Check it out!

Hip-Hopera Headed for Broadway: Finally, the news R Kelly fans have been wishing for. This week, it was announced that the R&B superstar is to take his Trapped In The Closest 'hip-hopera' to Broadway! The Beckhams Headed For Paris? David Beckham has announced that he is to leave the Los Angeles Galaxy in search of a new challenge. Rumors are that the famous family could wind up in Paris; where we're sure Victoria would fit right in!

Bond is Back: Thought Daniel Craig was ready to walk out on the Bond franchise? Think again! The 007 star has signed a contract worth a reported £31 million for two further films. Great news of course, though will Sam Mendes join him for the forthcoming movies?

Hopkins Doesn't Want That Carrot, Either: It was reassuring to here good old Sir Anthony Hopkins giving two fingers to the Hollywood awards' season this week. Just as Joaquin Phoenix spoke of his disinterest at the Oscars, Hopkins says he finds the whole thing pretty disgusting!