Justin Bieber has teased a new collaboration with Chris Brown by posting a picture of them in the studio on Instagram. 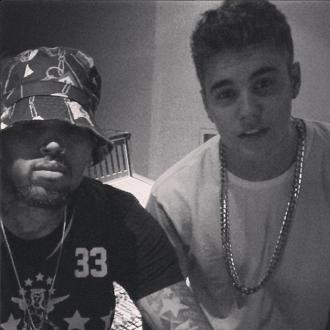 Justin Bieber and Chris Brown are recording a song together.

The 20-year-old teen heartthrob hit the studio with the R&B star over the weekend and teased fans about their collaboration with a series of candid snapshots straight from the recording booth.

Justin shared a picture of him with Chris, Akon and two other friends on Instagram with the caption ''studio.''

There is no news yet about whether the duet will be released as a single, but fans couldn't contain their excitement about the revelation.

The bad boy duo previously worked together on 2011 track 'Next To You', which appeared on Chris' 'F.A.M.E' album.

This is the first time 'With You' hitmaker Chris has returned to the studio since being released from jail, where he was serving 108 days behind bars for violating his probation stemming from his assault on Rihanna in 2009.

Justin's music career has also been taking a back seat of late due to his ongoing driving under the influence (DUI) case, which dates back to January when he was arrested in Miami for drag racing.

He was also forced to apologise after two videos of him making racist remarks surfaced online.