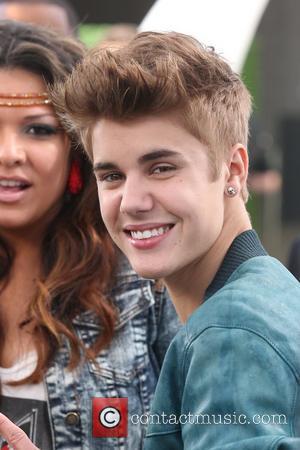 Singers Justin Bieber, Justin Timberlake and Michael Bolton thrilled Saturday Night Live fans over the weekend (12May12) by making unexpected cameos on the U.S. sketch show.
Host Will Ferrell and musical guest Usher earned rave reviews for their performances but the star trio stole the spotlight when they were invited onto the programme to celebrate The Lonely Island's 100th digital short.
The Lonely Island members Andy Samberg and Jorma Taccone were joined on stage by Bieber, and together they pranced around in suits and bow ties, singing, "Tonight we are celebrating our 100th short. Congratulations to us, to us, truly a major milestone. A celebration, yes, of us, of us, here's what we're going to do. We're going to shake off the cobwebs and limber up, and stretch it out and do plenty of Pilates 'cause tonight, we're going to suck our own c**ks."
Timberlake then reprised his '80s character to put a spin on his famous duet with Samberg, D**k in a Box, while actress Natalie Portman later appeared as her Snl hip-hop alter ego, rapping, "Yeah, I had a baby but I'm still crazy."
Also making a splash were veteran crooner Bolton, who returned as Captain Jack Sparrow, and Mad Men star Jon Hamm, who jumped in as bare-chested saxophonist Sergio Flores.
Comedy troupe The Lonely Island shows off its musical talents every week on Snl, often in collaboration with a celebrity guest. Since their debut in 2005, the group has had hits with I'm on a Boat with T-Pain, The Creep with Nicki Minaj, Akon's I Just Had Sex, Rihanna's Shy Ronnie and Lady Gaga's 3-Way (The Golden Rule).