Justin Bieber has got his new album title 'Purpose' tattooed across his tummy, adding to his already extensive collection of inkings. 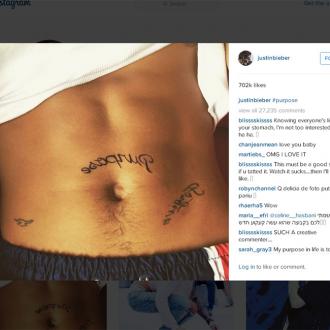 Justin Bieber has got a tattoo of his new album title.

The 21-year-old hunk has had ''Purpose'' inked across his abs, days after he announced it would be the name of his fourth studio record.

His latest piece of body art, which sits just above his belly button, appears between the word ''Forgive'' on one hip and a small bird on his other hip.

And it's not the first time the 'What Do You Mean?' singer has etched one of his album titles into his skin as he already has his 2012 record name 'Believe' tattooed on the inside of his left arm.

The latest stunt comes just a month before the album's release on November 13, when he will go head-to-head in the charts with One Direction, who will release their fifth record 'Made In The A.M.' on the same day.

But Justin has admitted he's unimpressed with the group's choice to pick the same release date as him and believes they've only done so to get some extra publicity.

He said: ''They're not really going on the road much, but we're talking about them right now, so it gives them some promo, right?

''So, that's probably why they did it ... I think it was strategy on their part because my release date was first.