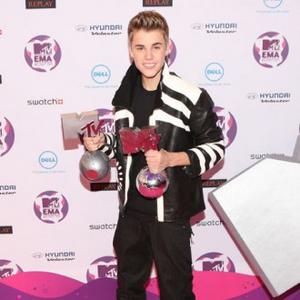 'Baby' singer Bieber has long been a fan of the elder singer turned actor, and is currently working with Timbaland, who was behind the latter's biggest hits including 'Cry me a River' and 'What Goes Around... Comes Around'.

Bieber tweeted last night: "in the studio with @timbaland and the crew. #creating (sic)."

Rapper Lil Wayne also dropped by and Bieber posted a picture of them skateboarding together.

Referring to Wayne by one of his nicknames, he later wrote: "Good time in the studio last night. back at it tonight. oh yeah...and big bro came and when i say big bro i mean @LilTunechi. #BELIEVE IT #family (sic)."

It is not known if Wayne will appear on Bieber's album, as he previously said he didn't want to work the 17-year-old at this stage in his career as he thinks he would "f**k his s**t up."

Bieber - who is set to call his third album 'Believe' - is also said to be in talks with Drake and Kanye West about appearing on the record, and has also worked with Black Eyed Peas main man will.i.am on tracks.