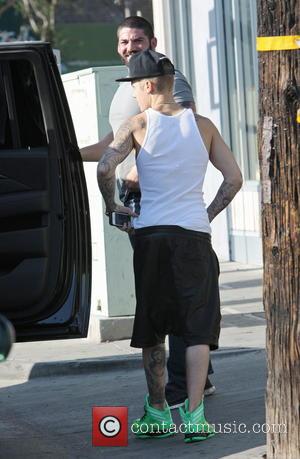 Picture: Justin Bieber - Justin Bieber gets out of a car with a friend and runs down Santa Monica Boulevard in West Hollywood, at one point...

Justin Bieber has escaped a Dui conviction after striking a plea deal and agreeing to complete an anger management course following his arrest in Florida earlier this year (14).

The Baby hitmaker was charged with Dui, resisting arrest and driving on an expired licence in January (14) after he was caught drag racing with a pal in Miami Beach.

He pleaded not guilty to the counts and the case was due to go to trial later this summer (14).

However, his attorney Mark Shapiro has managed to negotiate a deal with prosecutors, which was officially accepted in court on Wednesday (13Aug14).

Bieber was not present for the hearing, during which Shapiro entered guilty pleas on his behalf for misdemeanour charges of careless driving and resisting arrest.

Under the terms of the agreement, the Dui count was dropped and the singer was ordered to complete 12 hours of anger management counselling, pay a series of fines, and donate $50,000 (£29,412) to a local children's charity, which Bieber has already done.

It's the latest legal victory for Bieber - last month (Jul14), he also settled a misdemeanour vandalism case by pleading no contest to the count, relating to a reported egg attack on a California neighbour's home earlier this year (14).

He is still facing prosecution in Canada amid allegations he lashed out at a limousine driver in December (13), and he is also fighting an assault lawsuit filed against him by a paparazzo in Miami following an altercation last summer (13).