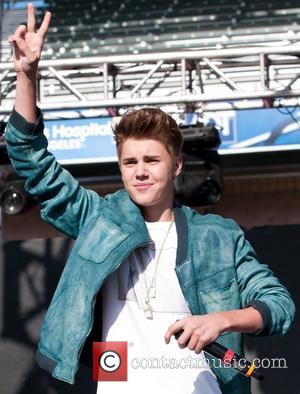 Justin Bieber made a high profile appearance on Saturday Night Live this past weekend, though his cameo in the show's 100th digital short surprised some of the squeaky clean star's fans. A string of other celebrities appeared too, including Justin Timberlake, Usher, Will Ferrell and Natalie Portman, though young pop-star Bieber stole the headlines.
He is seen dancing enthusiastically with Andy Samberg and Jorma Taccone to celebrate the show's 100th digital short, but when the comedy duo sing, "Tonight we're going to suck our own d****", Bieber's face drops and he says, "What? That's disgusting", before adding, "I was tricked into doing this!" Jon Hamm's character is later seen thrusting against the teen star, in what is easily one of the most bizarre shorts of the season so far. It's no secret that the Canadian singer is attempting to take his career in a more mature direction, though the skit took some of his fans by surprise. Nevertheless, the majority of his Twitter followers appeared to revel in the risque appearance, with one saying, "Omg that #snl digital short was amazing!!!! bieber, timberlake, natalie portman, usher, michael bolton, will ferrel..... So Funny!".
Next week's instalment of Saturday Night Live will be hosted by Mick Jagger, with guest musical appearances from the Foo Fighters, Arcade Fire and JEFF BECK.