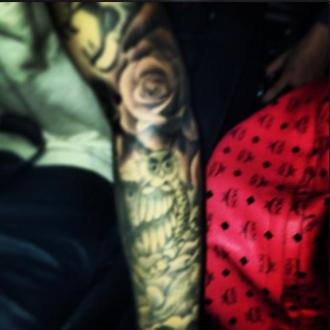 The 'Never Say Never' singer proudly showed off his latest inking of a rose on Instagram after reportedly spending four hours at Bang Bang's tattoo parlour in New York City yesterday (01.08.13), where the ink expert put the finishing touches to his design on his left arm.

The 19-year-old pop superstar took to the photo sharing site today (02.08.13) to flaunt his new design, which he teamed with the caption ''Art''.

Justin's inking comes just a few weeks after he revealed his eyeball tattoo, which allegedly represents the watchful eye of his mother, Pattie Mallette.

The ultra-realistic eye design sits in the crook of his left arm, just above the word 'Believe', which the hunk got to commemorate the release of his third album.

This brings ink-mad Justin's tattoo tally up to 17, with some of his more original images including a portrait of Jesus, an owl, and girl closely resembling his ex-girlfriend Selena Gomez.

Hopefully, Bang Bang - whose clients include Cara Delevingne, Rita Ora and Rihanna - received a warmer welcome from Justin than his last tattoo artist.