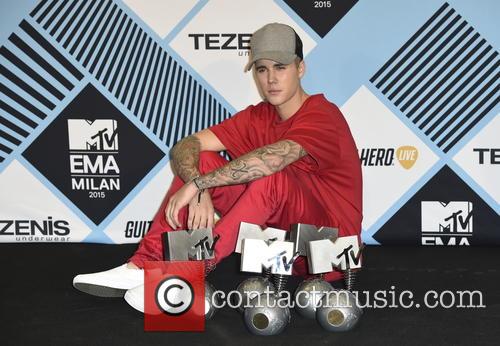 After picking up his second award of the night, Bieber also paid tribute to his fans who have supported him over the past few months. “You guys are unbelievable,” he said. “That’s where I belong, right up there on that stage.” Ed Sheeran picked up the award for best live act and later in the night he was joined onstage by Rudimental for a performance of collaboration 'Lay It On Me’. The night also saw performances from Pharrell Williams with 'Freedom', Ellie Goulding singing 'Love Me Like You Do' and Macklemore & Ryan Lewis, giving a rendition of ‘Downtown’.

More: Justin Bieber Thinks His Dad's Reaction To His Nude Photos Was “Hilarious"

Other big winners included Nicki Minaj, who scooped Best hip hop, One Direction who were named best pop, Rihanna for best female and Coldplay for best rock. Bieber was also honoured again in the best collaboration category, sharing the award with Skrillex and Diplo for ‘Where Are You Now?’ Duran Duran were honoured with the first ever MTV video visionary award.

Legendary pop act Duran Duran became the first ever recipients of the MTV video visionary award, celebrating over three decades of the band’s music videos. Accepting the award frontman Simon Le Bon said: “Music lovers around the world, when we started there was us and MTV and we blazed a trail and we were there for each other.”