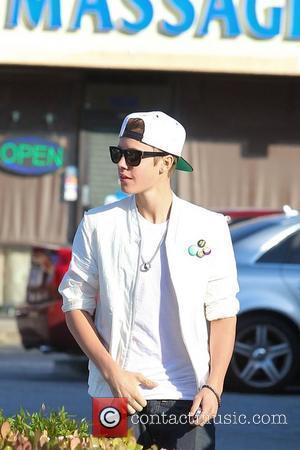 Picture: Justin Bieber wears a white jacket and matching baseball cap while out and about in Beverly Hills Beverly Hills, California - 08.04.12

Fans of 'The Voice' could be forgiven for not noticing that two more contestants were sent home on Tuesday night (April 17, 2012), such was the hype for Justin Bieber's appearance on the show. The teen superstar arrived to introduce a short clip of his forthcoming video 'Boyfriend', and whipped the crowd into a frenzy.
However, there were more important matters at hand for the contestants on the show, with two of the six facing elimination. After the hysteria from Bieber's performance had finally died down, the show got down to business and judges Christina Aguilera and Blake Shelton were asked to send home one contestant each. Aguilera had stirred up controversy the previous night by eliminating frontrunner Jesse Campbell, with Adam Levine saying afterwards, "I was really shocked, and I'm not easily shocked". Christina defended her decision by offering, "I am no stranger to controversy and I am OK with that.I am fearless in the face of what I believe". On Tuesday, she chose to save Chris Mann, with Ashley De La Rosa getting the boot. Meanwhile, country star Shelton chose to eliminate the Dolly Parton loving RaeLynn.
Beliebers who thought Justin's appearance on Tuesday's show was too brief will be delighted to hear that the singer will be returning to The Voice finale in three weeks' time to perform 'Boyfriend'.