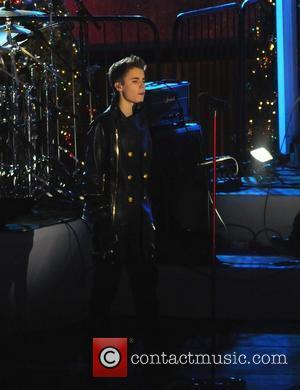 Justin Bieber, rapper Drake and Faith Evans turned out to perform at Stevie Wonder's charity show in Los Angeles on Saturday night (17Dec11).
The Signed, Sealed, Delivered I'm Yours hitmaker staged the 16th Annual House Full of Toys Benefit Concert at L.A.'s Nokia Theatre and he introduced an array of stars to the stage.
During the four-hour extravaganza, to raise money for families in need, Bieber spread some early Christmas cheer by singing hits from his festive album Under the Mistletoe, before teaming up with Wonder for a duet on Someday at Christmas.
Bieber logged on to his Twitter.com page after the performance to post a link to a video clip of the duet and declared, "Dreams do come true."
Wonder took to the stage again later in the evening to reveal the venue had an 11.30pm curfew and offered to pay for the overtime himself. He then launched into a mini-set of his most popular songs, including Higher Ground and What Christmas Means to Me.