Justin Timberlake and Jessica Biel have stepped out for the first time since welcoming son Silas Randall back in April. The proud parents were honoured with the ‘Inspiration Award’ at the Gay, Lesbian and Straight Education Network's Respect Awards on Friday evening, where Timberlake admitted they’re ‘not very good’ at parenting yet. 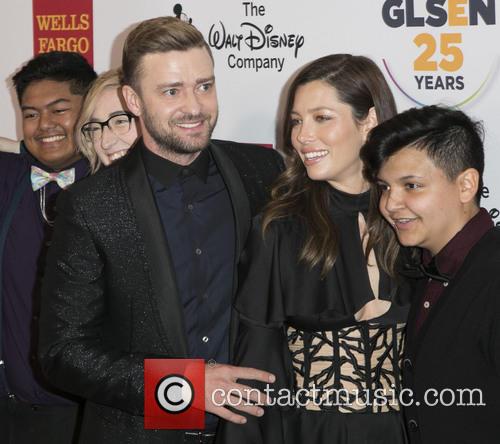 Collecting the award Timberlake said, "My beautiful wife and I are a couple of new parents. We're not very good at it yet.” The couple rarely make red carpet appearances together, but the arrival of baby Silas means their nights out are getting fewer and fewer.

"Thank you for allowing mommy and daddy to have a rare date night out together with other adults,” Timberlake joked. Then turning to wife Jessica, Timberlake added, "Honey, look around, this is what adults look like! They do exist. They don't smell like poopy diapers -- some of you do.”

Timberlake also thanked GLSEN for the honour saying, “Thank you to GLSEN, not just for this meaningful honour we're proud to share but for a quarter century of inspiring positive change, which means it was right around the time as ‘The Mickey Mouse Club’, but still not as important as ‘7th Heaven’.”

The singer also praised the organisation for "starting a trend for change, a change that one day will make it possible for our own son to grow up and thrive in a world where ... all you have to do is be yourself.”

Last week Timberlake became the youngest singer to be inducted into the Memphis Music Hall of Fame. During his 30 minute acceptance speech the singer also paid tribute to Biel, telling her, “Baby, I love you. More than I could put into words and more than any song I could ever write.”