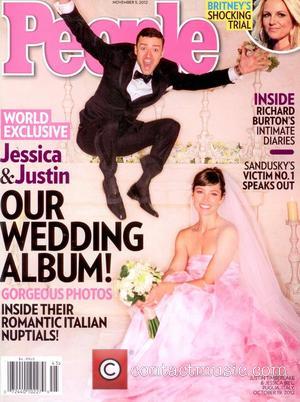 However, an alleged video featuring a homeless person that was shown at the wedding could land the whole thing in controversy. Justin Huchel, friend of Timberlake's and the man behind the offensive vid, is threatening legal action against the website Gawker, who published a 20-minute clip of the vid, E! Online reports. "Mr. Huchel made a video to be used and exhibited privately at Justin Timberlake's wedding as a private joke without Mr. Timberlake's knowledge," wrote Huchel's attorney, Michael J. Saltz. "Further, Mr. Huchel informs us that his copyrighted video was recently stolen." The video features members of the homeless community of Hollywood giving their best wishes to Timberlake and Biel during their fancy wedding in Europe, and is considered by many to be in bad taste, and exploitative of the poor.

"My client, as the copyright owner of the Stolen Video, has not authorized you to reproduce, distribute, post or otherwise display copies of those materials," read the follow up, after Gawker had initially refused to take down the clip, before obliging after a second letter claimed it was a violation of the Digital Millennium Copyright Act. "Any publication, reproduction or dissemination of the Stolen Video...constitutes an infringement of my client's exclusive copyrights."