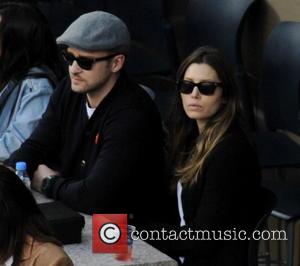 Picture: Justin Timberlake and Jessica Biel - Celeberties came out in style to watch the Mens Final at the 2013 US Tennis Open. - New York...

Music lovers at the iHeartRadio Music Festival last weekend (September 20th-21st 2013) were in for a treat as Justin Timberlake rounded off the event with a few new tunes.

It was a rather special set from the 'Suit and Tie' singer who has dealt well with the endless live shows and televised performances pretty much running through the whole year. He was introduced to the stage by undefeated welterweight boxer floyd mayweather who crowned him 'the heavyweight champion of music'; a prestigious title that his thrilled audience certainly didn't appear to dispute. As well as performing some timeless hits from 'Cry Me A River' to 'SexyBack' to 'Mirrors', JT unleashed some brand new tracks from 'The 20/20 Experience' follow-up, 'The 20/20 Experience 2 of 2'. He sang his most recent single 'TKO', as well as 'True Blood' and 'Only When I Walk Away'. Even aside from the music Justin was an act not to be missed, oozing with charisma as he owned the stage with his entertaining and often comedic dance routines.

Other notable performances from the weekend came from everyone's favourite controversy Miley Cyrus, who belted out hits such as 'Wrecking Ball' and 'We Can't Stop' wearing a customary revealing outfit; Joan Jett, who teamed up with Ke$ha in an unusual performance which celebrated her 55th birthday; and Paul McCartney, who was promoting his, quite literally, 'New' album set for release on October 15th.

Justin Timberlake will release his hugely anticipated new album very soon on September 27th 2013 and is set to support it on a major world tour kicking off in Canada at the end of October. But, for now, you can check out his entire live iHeartRadio set online. JT will embark on a new tour later this year