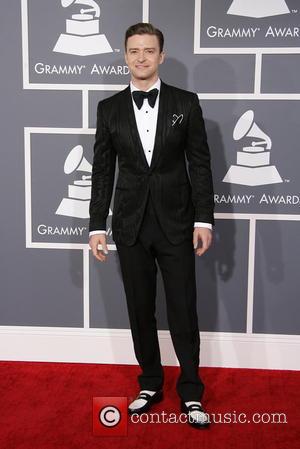 Justin Timberlake continued his musical comeback at the Grammys on Sunday evening (February 10, 2013), performing new single 'Suit & Tie' with Jay-Z and album track 'Pusher Love Girl' which briefly turned the telecast black-and-white. Many assumed Timberlake had washed his hands with the music business after turning his focus to movies, though he announced his comeback last month.

His return was somewhat eclipsed by the press coverage surrounding Beyonce's inauguration miming and her Super Bowl performance, though Timberlake's comeback still represents one of the biggest musical stories of the year. He had warmed up for the Grammys gig with a pre-Super Bowl performance, debuting two additional new songs 'Pusher Love Girl' and 'That Girl' and he looked his usual polished self on Sunday. Shortly before the performance, the singer's people had taken to his Twitter account to announce some very special news. "Big news coming out after Justin's #Grammys performance. Stay tuned or you'll miss it! #moreJT -teamJT" That turned out to be the release of new song 'Mirrors,' a reflective track in which Justin addresses his "other half." Though it's unclear how autobiographical the song is, Timberlake sings about taking a break from the relationship , just like he did from his now-wife Jessica Biel. "It was easy coming back to you, Once I figured it out, you were right here all along," he sings, "It's like you're my mirror, my mirror staring back at me, I couldn't get any bigger, With anyone else beside of me."