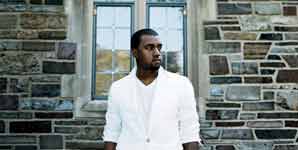 Kanye West may not be the most modest-man of our time, but like many before him, his arrogant swagger is pushed aside by his genuine talent to produce anthem after anthem and his ability to capture and hold an audience.

In only a short space of time since joining Roc a Fella, Kanye has had 2 smash hit albums and numerous Grammy awards.

On the 21st of September 2005, Kanye West went into the record books with the help of Radio 1. Performing at the world famous Abbey Road Studios (the Beatles studios) in front of 300 hand picked fans, that I can only guess were more than happy to accept, he performed live 12 of his most famous tracks. Kanye was backed by a 17 piece all-female- string section dressed in elegant black evening gowns and red eye masks which all tied in with Kanyes outfit, white shirt and trousers with a black suit jacket, a red rose and not forgetting his iconic Aviator sunglasses.

The crowds' vibe is so infectious, the roars burst through the speakers as the crowd screams to their favourite songs when the intros trickle in.

Although the event was performed at the historic Abbey road studios, the recorded sound quality is poor considering, yet the live vibe itself soars as Kanye kicks off the epic night with Diamonds From Sierra Leone, then follows with his latest funky single Touch The Sky, sample taken from Move On Up by Curtis Mayfield, then the album tracks Crack Music and Drive slow. Through the wire intro is overwhelmed by 300 screaming fans and reminds you why the once unheard of Kanye now rules the radio waves. Work out plan didn't receive the commercial justice that is should of yet it still sounds fresh live, the simple piano on Heard Em Say is an amplified lullaby in the Abbey studio.

The crowd are awoken again as they take over the chorus on All Falls Down, another couple of album tracks Bring Me Down, Gone and Late. Of course no Kanye performance is complete without the echoing sound of Jesus Walks, the haunting choir sends you into a trance.