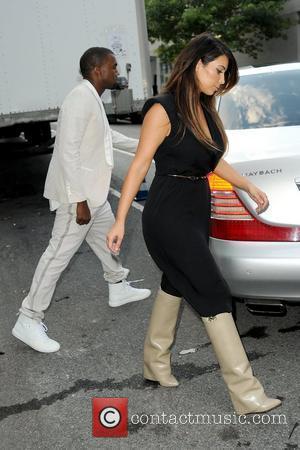 Picture: Kanye West and Kim Kardashian get into an awaiting Maybach, after the couple went shopping together in Soho New York City, USA - 02.09.12

Kanye West and Kim Kardashian may be a relatively new phenomena, but it seems the superstar rapper has had the reality star in his sights for years. Sources say Kanye West declared his undying love for Kardashian back in 2009 while she was still dating REGGIE BUSH: it looks like everyone missed the hints.
West penned lyrics confessing his love for Kim in his 2009 single 'Knock You Down', indirectly referencing his current girlfriend and her then boyfriend. In the song, Kanye raps, "You was always the cheerleader of my dreams / To seem to only date the head of football teams / And I was the class clown that always kept you laughing / We were never meant to be, baby we just happened". Later, he sings, "You should leave your boyfriend now". Sources "extremely close to Kanye", tell TMZ.com that 'Knock You Down' is just one example of Kanye's secret references to Kim in his music, though it proves he's been pursuing her for years.
Kim and Kanye got together just weeks after he referenced her ex-husband Kris Humphries on his track 'Theraflu'(now titled Cold). West sang, "And I'll admit I fell in love with Kim, around the same time she had fell in love with him. Well that's cool, baby girl, do your thing. Lucky I ain't have Jay drop him from the team". The lyrics refer to Kanye's pal Jay Z, who partly owns the New Jersey Nets, the basketball team that Humphries plays for. Of course, Kanye bagged Kim, though Kris was hardly dropped from the team, signing a $24 million contract earlier this year. Swings and roundabouts.