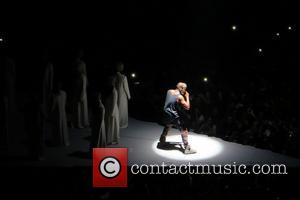 Picture: Kanye West - Kanye West performs to a sold-out crowd at Madison Square Garden as part of his 'Yeezus' tour. The eccentric rapper performed the...

Rapper Kanye West almost disrupted filming on the set of Will Ferrell's new Anchorman movie after deciding to treat the cast and crew to a special preview of his new album Yeezus.

The Stronger hitmaker shot a cameo appearance in Anchorman 2: The Legend Continues in May (13), a month before the release of Yeezus, and he played tracks from the project for Ferrell and his co-stars in between scenes.

However, the funnyman admits West failed to stop the music when it was time for the cameras to start rolling again.

Ferrell tells Rolling Stone magazine, "He was playing it (Yeezus) on the set, which was great. But then he didn't understand when it had to be turned off, when it was time to film. He was like, 'Hey, what's going on!' We didn't want Kanye to get upset, but at the same time, we kind of had to film."