Kanye West attempted to snatch a photographer's camera after she asked him whether he'd congratulated girlfriend Kim Kardashian's ex-boyfriend REGGIE BUSH on his baby news. 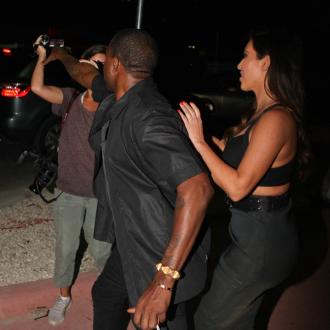 Kanye West tried to snatch a paparazzo's camera after being questioned about Kim Kardashian's ex-boyfriend.

The couple tried to avoid Kim's former flame REGGIE BUSH on Sunday night (14.10.12) as he and his pregnant girlfriend Lilit Avagyan dined at the Prime Italian restaurant just yards away from the Prime 112 eatery Kanye and Kim were at in South Beach, Miami.

As both couples exited the restaurants Kanye came face-to-face with the Miami Dolphins football player in an awkward chance encounter.

The rapper then lost his temper when a female photographer asked him if he'd congratulated Reggie on his baby news, prompting him to try and grab her camera from her grasp as Kim tried to pull him back.

Following the incident, the couple sped away in a Rolls Royce car.

Kim and Reggie dated on and off for two years and came close to getting married before they eventually split for good.

It has been claimed that Kim, 31, is upset that Reggie, 27, is having a baby with professional dancer Lilit, 25, because she had wanted to settle down and start a family when she was with him.

A source told RadarOnline.com: ''Kim is upset. Kim had pressured Reggie for a very long time to get married while they were together because she wanted to have a family with him.

''Reggie just thought that Kim placed too much of a priority on her fame and reality television though and he wanted none of it.''