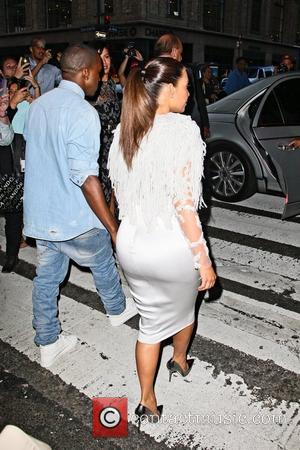 Kanye West has insisted that he's completely cool with Kim Kardashian's sex tape with Ray J. Apparently he's not so hot on another of her ex-boyfriends though, with TMZ reporting that questions about REGGIE BUSH angered the rapper to an extent that he rushed the inquirer.

Kardashian and Bush had an on-again off-again relationship between 2007 and 2010, breaking up initially in the summer of 2009. Bush however has since gone on to announce that he and his current girlfriend Lilit Avagyan are expecting their first child together, whilst Kardashian has of course gone on to get married and subsequently divorced with Kris Humphries. Now with West, it looks like the pair could be heading the same way, but the rapper evidently isn't quite as comfortable with his beau's past as he's let on.

TMZ reports that the couple were leaving a restaurant on Miami Beach after a dinner date when a paparazzi asked Kardashian if she was aware that Bush was also there having dinner. A further question followed about if she was going to congratulate on him on his new pregnancy news, and it was at this point West snapped, grasping for the photographer's camera - although not striking her - before they got into a waiting Rolls Royce. Kardashian smiles throughout, loving the attention no doubt.