West: 'Chris Martin Is A Genius' 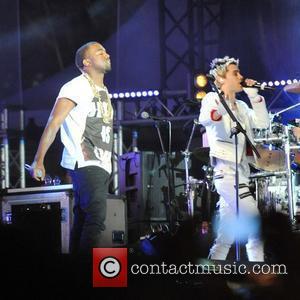 Kanye West dreams of recording an album with Chris Martin - because he's convinced the British rocker and his Coldplay bandmates are "more talented than THE Beatles".
Martin lent his vocals to the rapper's 2008 track Homecoming and West was so impressed, he's now begging the Yellow hitmaker to join him in the studio again - because he believes a collaboration with Coldplay could make "one of the greatest albums ever".
West says, "America has, and probably always will, dominate music across the globe but it's always been the British who pull out that very special band.
"We have had amazing bands like Nirvana and Guns N' Roses but it's the British who have had the cream with The Beatles and The Rolling Stones setting the standard. I love Coldplay, and I honestly think they are on the same level as The Beatles.
"In 30 years, when Coldplay are old men, people will look back and say, 'These guys were more talented than The Beatles.' I have worked with Chris Martin and the man is a genius - as a performer and a songwriter he is on the same level as John Lennon.
"I am not saying this sort of s**t lightly, it's really how talented the guy is. And Coldplay can go down as the best ever - even bigger than The Beatles.
"I have worked with Chris before but I'd like to work with him and the rest of the group next time. I have worked with some greats in my career but I really want to get in the studio and make an album with Coldplay.
"Jay-Z and Linkin Park made a sick album, and on paper that shouldn't have worked but it did. I want to meet with Chris and talk seriously about doing that. With us all in the studio we could create one of the greatest albums ever."