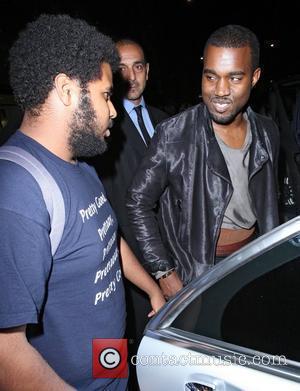 Picture: Kanye West leaves a special screening of his new film 'Runaway' at Bafta Piccadilly and was impressed by a fan who stopped him and began...

Kanye West has premiered his 35-minute film RUNAWAY during a whistle-stop promotional trip to Europe.
The rapper presented the short film in Paris, France on Tuesday (05Oct10) and officially premiered the project at the British Academy of Film and Television Arts (BAFTA) in London the following night (06Oct10).
He told the audience that the inspiration for the film was Michael Jackson's Thriller video, Prince's Purple Rain movie and the artists Pablo Picasso and Henri Matisse, and revealed, "It's an overall representation of what I dream."
West also told fans that 90 per cent of the music featured in the film appears on his upcoming album, My Beautiful Dark Twisted Fantasy.
The film chronicles West's fictitious relationship with a girl who becomes a phoenix from outer space. It was shot during the summer (10) in Prague, Czech Republic.