Karen Elson has returned to modelling for the first time since her split from husband Jack White.

The former Vogue cover girl - who has modelled on the runway for designers including Alexander McQueen, Marc Jacobs and Jean-Paul Gaultier - has posed for Banana Republic's Christmas Collection, following her divorce from the White Stripes singer.

The striking beauty is seen wearing a range of party dressed and jumpers for the campaign, and has admitted she much prefers to give presents than to receive them.

She said: "To be honest, I'm more of a giver. I love to find a gift that has meaning to the person I'm giving it to."

Flame-haired Karen - who is also a singer - has previously revealed she was labelled as a "freak" when she first started her modelling career.

She said: "It was all, 'You're the freak! You're the freak!' They would say, 'She's weird, she doesn't look normal. She's ugly.' I'd be backstage and every journalist would ask, 'You're a freak; how does it feel?' And I'd be like, 'I'm 18, I don't know how it feels, can I just go and smoke a cigarette, please?' but thank God that all happened because it changed everything!" 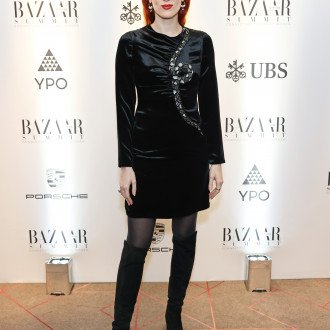