The Guardians of the Galaxy stars were on-hand to promote the movie - still a year off - at Comic Con 2013. 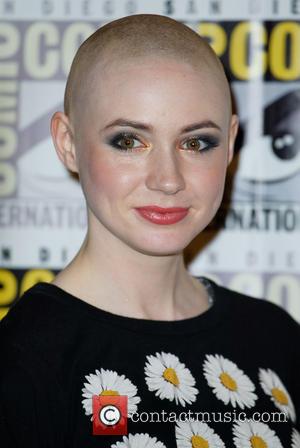 Though it was Thor 2, Breaking Bad and The Hunger Games that made headlines at Comic-Con, the Guardians of the Galaxy gang were about to promote James Gunn's movie, which is still a way off - set for release on August 1, 2014.

A newly bald Karen Gillan - who shaved her head for the film - discussed getting in shape for the high-octane movie, telling us on the red-carpet, "I feel like I'm in an action movie bootcamp right now where I am on set everyday learning how to fight and I'm training like crazy and it's a really cool way to get into the character I think."

Her co-star Lee Pace praised the movie's director, saying: "James Gunn has got a great vision for the movie. He just showed us a little clip of what he's been working on for the past 10 days and it's excellent."

Wrestler tuned movie star Dave Bautista plays Drax in the forthcoming movie, described as "a human resurrected as a green warrior with the sole purpose of killing Thanos," by the Hollywood Reporter. Also sporting a bald head, the actor spoke of his disappointment at not getting to see much of Comic-Con this year, "This is my third year in a row here and I wish we had more time to spend here but we literally flew in just for this and we're flying out right after,' he told us.

His co-star Michael Rooker, also bald, drummed up anticipation for Guardians of the Galaxy, saying, "'This movie that we're doing now has got so much stuff coming into it; people are digging it already before they've even seen two minutes of it."

Chris Pratt fended off competition from the likes of Joseph Gordon-Levitt for the lead role in the movie, and he hit the red-carpet alongside Zoe Saldana to promote 'Guardians.' Reflecting on seeing the first batch of footage from the movie, Pratt explained, "It's not all what you'd think like us standing there in front of a green screen, I mean these are real sets 150 yards wide by 150 yards wide, hundred feet tall and it's just swarming with people who are living their dream of doing something really cool and artistic."

Guardians of the Galaxy is the tenth instalment in the Marvel Cinematic Universe and is based on the superhero team of Marvel Comics.