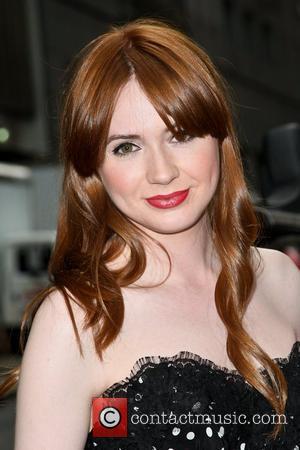 The Guardians of the Galaxy are a 31st century team of superheroes who debuted in Marvel's Marvel Superheroes comic books in 1969 and were quickly given their own self-titled series of 62 comics.

The movie, adapted from the popular comic books, will be a futuristic action-thriller set in space and feature ex-cons on the run in the midst of galactic warfare.

A former model, Gillan has been described by director John McKay, who previously worked with her on 2012's Not Another Happy Ending, described the redhead as a "very bubbly, vibrant, energetic, funny, slightly clumsy person." These are hardly the characteristics of an intergalactic villainess: it seems Karen is looking to play more serious roles.

Although specific details of her character were not disclosed, it has been confirmed that Gillan will take the role of the "lead female villain" in the film scheduled for release in August 2014. The rising star is yet to comment, but it is clear her post-Doctor Who career is set to take her to stratospheric heights with further out-of-this-world roles. Both Zoe Saldana [L] and Chris Pratt Have Already Signed Up For 'Guardians of the Galaxy'.