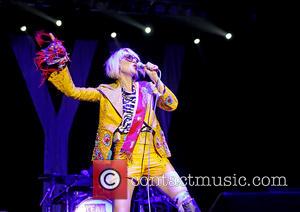 The Yeah Yeah Yeahs frontwoman earned her first Academy Award nod for The Moon Song, the track she wrote for Jonze's acclaimed film.

While she wasn't expecting the recognition, Karen O is grateful to Jonze for prompting her to tackle her on stage speaking fears.

She tells Rolling Stone, "To say this was unexpected is an understatement... The song was 10 years in the making according to Spike and testament to a beautiful friendship and creative chemistry we've shared over the years... Thanks Spike for making my very real phobia of ever having to be in a position to give an acceptance speech at a major award show a reality."

Karen O, who previously collaborated with Jonze for the soundtrack to his 2009 adaptation of children's book Where the Wild Things Are, is up against a number of big names including Pharrell Williams, who is nominated for his Despicable Me 2 theme Happy, and Irish rockers U2 for Ordinary Love from Mandela: Long Walk To Freedom.

The Best Original Song prize will be handed out at the Oscars ceremony on 2 March (14).