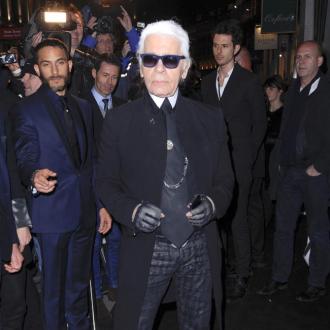 Karl Lagerfeld organised a feminist march on the streets of the French capital as part of Paris Fashion Week.

The 81-year-old designer staged another epic show during the event, with women carrying feminist slogans while marching down Boulevard Chanel.

The show was led by supermodel Cara Delevingne, who was also handed a megaphone.

The 22-year-old from London was flanked by Kendall Jenner, Gisele Bundchen and Georgia May Jagger, among others.

Many of the women were carrying placards that displayed statements such as '#HeForShe' and 'History is her story'.

The event was watched by a number of famous faces from the fashion industry, including Alexa Chung, Poppy Delevingne and Laura Bailey.

The fashion icon - who juggles his self-titled line with his work for Chanel and Fendi - said: ''Most of the designers, especially the young ones, have ego problems. I couldn't care less. The label is the label and I try what I can do.

''If you're not detached you mess everything up. You have to be detached. When I do the shoes I don't think about anything else...

''If I feel like I am on the wrong track, or they do not see things the way I see them, then I forget about it. I lose interest. It can be my name; it can be everything. I don't care about my name.''