Chris Brown's Ex Karrueche Tran Has Fueled Rumours Of A New Romance With Dutch Soccer Star Memphis Depay After Travelling To Manchester, England To Visit Him And Watch Him Play. 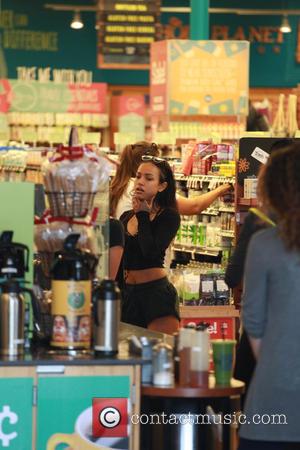 Picture: Karrueche Tran - Karrueche Tra holds a tissue to her nose and strokes her throat as she goes at a pharmacy in Beverly Hills -...

The model dumped R&B singer Brown in March (15) after it was revealed he had fathered a baby girl with his former friend Nia Guzman last year (14).

Tran was subsequently linked to Manchester United's new $40 million (£25 million) signing in June (15), and it appears their budding relationship is still going strong.

Karrueche was spotted hanging out with Memphis in Manchester this week (begs28Sep15), ahead of United's Champions League game against German team VfL Wolfsburg, and she took her place in a suite reserved for players' wives and girlfriends at Old Trafford on Wednesday night (30Sep15).

Tran proved to be a lucky charm at the game - Manchester United beat Wolfsburg 2-1.

Karrueche, 27, and Memphis, 21, have yet to comment on the romance rumours.