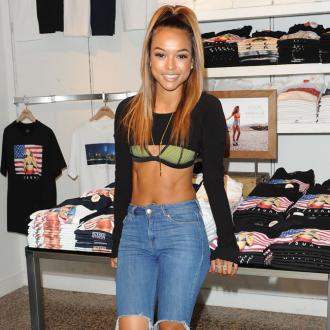 The 26-year-old model was hosting an episode of '106 & Park' on BET, in which she and co-host Brandon Broady were discussing the weekend's MTV Video Music Awards, when she was prompted to make a comment about the superstar couple's daughter, Blue Ivy - whose hair was worn in a wild afro style on the night.

Following Brandon's introduction of a segment titled 'The top six things Blue Ivy thought about the VMAs', Karrueche said: ''I really did wake up like this because my parents never comb my hair.''

Immediately after delivering the joke - which played on the lyrics of Beyonce's hit single 'Flawless' - Karrueche apologised saying, ''Sorry Blue, I love you!''

The brunette beauty - who recently got back together with her on-again off-again boyfriend Chris Brown - later claimed the script had been changed following rehearsals and she'd had no choice but to read it off the teleprompter.

She told gossip site TMZ: ''I love that Blue is able to wear her natural hair.''

However, fans of Beyonce, Jay and Blue weren't as quick to forgive the star for her comment.

One Twitter user wrote: ''As a human being w/ a brain, it's also a bit worrying that @Karrueche would bully a 2-year-old Blue Ivy on @BET. You are not a puppet, right? (sic)''

Karrueche later attempted to defend herself, writing: ''Now y'all know I LOVE me some Beyonce and Blue Ivy! I didn't write this script y'all lol (sic)''