Chris Brown's Ex-girlfriend Karrueche Tran Has Ordered The Singer To "Man Up" After He Criticised Her For Detailing Their Relationship In A Recent U.s. Tv Interview. 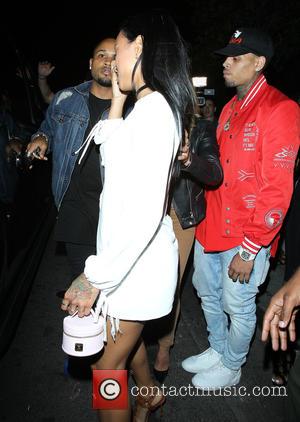 The Forever hitmaker was dumped by the singer/model in March (15) after he was revealed to have fathered a baby girl with another woman, Nia Guzman, last year (14), and in an interview with Access Hollywood last week (ends14Jun15), Tran opened up about Brown, saying, "I don't know if a friendship will necessarily work but I definitely want to keep on good terms. I want to be cordial and positive - no drama."

Speaking of Brown's daughter Royalty, Tran added, "Royalty is a beautiful, young girl, and it's a blessing for the both of them. But for me, it's just like, a different story. So I just kind of had to wipe my hands away from that..."

Brown subsequently blasted Tran in a message posted on Instagram.com, writing, "Honestly, it's so f**king pointless to keep doing interviews about me. Talk about your career. If there is no more relationship then u (sic) shouldn't be doing f**king interviews with people I won't let get the pleasure of prying into my personal life. S**t starting to get real weak now."

When Tran read his response, she fired back with a lengthy Instagram post of her own, slamming her former lover for taking his attempts to win her back to extremes.

She wrote, "My interview... was not all about you. They asked a question and as a mature adult I answered. I'm not gonna shy away from something that I lived through... I'm not speaking on you (sic) or bashing you (like I easily could). Don't be mad at me because our relationship is over due to your lack of loyalty.

Brown later appeared to make a move to end the war of words by posting a positive message for his ex-girlfriend, sharing an old picture of them together and writing, "I'm eternally thankful for you being in a part of my life. I've learned so much from you. Wish u (sic) nothing but happiness and the best... All I was doing was trying to fight for the woman I love. Thanx (sic) I learned a lot."