Model Karrueche Tran Has Cleared Up Rumours There Are Longstanding Issues With Her And Singer Rihanna, Insisting There Is No Drama Between Chris Brown's Ex-girlfriends. 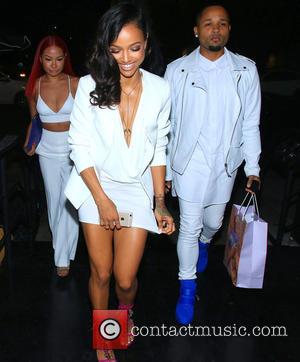 Tran began dating singer Chris Brown in 2011 after he parted ways with the Umbrella hitmaker in 2009 and he famously dumped the model in 2012 when he briefly reunited with Rihanna.

Brown reconciled with Tran when he and Rihanna split again in 2013, and the couple was together until she broke off the romance earlier this year (15)l, after it was revealed the R&B singer had fathered a little girl with a friend.

Now months removed from her part in what many believed was a love triangle, Tran is speaking out about her feelings for Rihanna, who once stole her man.

She tells Big Boy TV, "We just dated the same guy and that's kind of what it is.

"It's always a competition thing and they compare us but she is Rihanna. She's a pop star and she's beautiful and she makes great music and I'm just me and I'm growing and working into myself. You can't really compare us; we're two completely different girls."

But Tran admits Brown's fling with his ex left a scar on her heart, and led to trust issues when she reconciled with the Fine China hitmaker: "After the whole Rihanna thing, we've been trying to fix what was broken."

The model admits Brown's baby news was "just the icing on the cake," adding, "I just had to completely part ways (with Brown)."

The singer's daughter, Royalty, has just turned one.