Review of Kasabian live at Brixton Academy on 19/08/10

Kasabian's headline slot at V this weekend has taken something of a backseat with The Libertines impending reunion at Reading/Leeds the following weekend. Both booked in warm up shows in smaller than usual venues. Both sold out in minutes. Whilst The Libertines play the Forum next week, Kasabian returned to Brixton Academy last night, laying down the gauntlet for them and anyone else wishing to get in their way. Played under a flag of St. George hanging from the rafters, the statement to their contemporaries was there for all to see. 'We're the biggest band in Britain.' Be honest, no one really gives a shit about Radiohead any more. 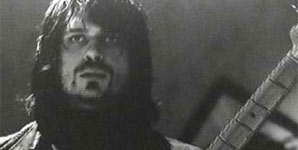 'Shoot the runner / Shoot shoot the runner' purrs Tom Meighan at little after 9pm, using huge shades and all-black attire to hide the affects of what looks to be an almighty rider. Yet, as 'Underdog' comes bounding into sight it is clear Doherty et al. have their work cut next week to keep up. Growls and goading throughout, with a crew cut and stubble, Meighan could be mistaken for Liam crica-Be Here Now. The difference being, he doesn't have an ego, or not a Gallagher sized one, at least. Posing is replaced by dancing and a humble appreciation of the crowd that was always lost on Gallagher Junior.

The set covered all 3 albums in equal measure, rising and falling nicely and showcasing the wealth of material available to the pride of the East Midlands. What keeps things fresh is an appreciation to move things round whilst on the same tour - something Oasis rarely did. Small tweaks to their headline show at T ensured only the encore remained in the same order. 'Fire,' 'Vlad The Impaler' and 'LSF' is a bigger finish than Mo Farah in the 5,000 metres, and definitely bigger than any band's in Britain at the moment. Despite being absolutely rinsed, 'Fire' sends the Academy sprawling in a mass of limbs and the breakdown to their set clincher was carried out all the way to the street as if a football chant from the terraces. "You know what's coming," was Tom's final goodbye, this was definitely a home win.

The comparisons to Oasis have always been plentiful, but the biggest has to be the strength of every tune. Underdog B-side 'Julie & The Moth Man' bites and snarls before the touching 'West Ryder Silver Bullet' draws imagery of a Wild West gunfight. Saloon doors still swinging, Serge takes centre stage for an epic 'Take Aim' backed by a brass section. Derided by some for being lad-rock, the depth of their current live show was no more apparent than in album tracks 'The Doberman' and 'Stuntman' sitting either side of the seminal 'Club Foot.' Even 'Stuntman's transition into Donna Summer's 'I Feel Love,' though a little strange, kind of worked.

Ignore them at your peril, Leicester's finest won't be going anywhere for a long while yet. Over to you Libertines.