Each year the Teenage Cancer Trust puts on a series of gigs, and each year the line-up is equally impressive. Needless to say, with Noel Gallagher, Damon Albarn, Primal Scream, Russell Brand and Kasabian on the bill, this year was no exception. I was there to see the mighty Kasabian take to the stage for the Friday night slot to raise money and the roof off the Albert Hall. 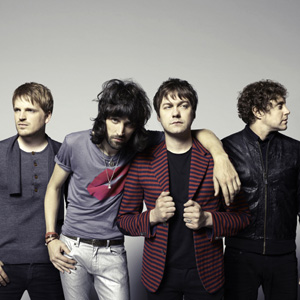 The band certainly know how to kick off a show with uninhibited panache; recent track Days Are Forgotten lead them in with ease, swiftly followed by fan-favourites Shoot the Runner and Velociraptor which had the eager crowd dancing and singing along to their deliciously poppy choruses. There are few singers who own the stage with such a nonchalant self-assured swagger as this Leicester quartet's Tom Meighan does and he lead the way accordingly as anarchic Reason Is Treason and the grinding electronic opening bars to I.D. reverberated through the historic venue. Last Night of the Proms this was not but there was certainly no-one complaining.

The string accompaniment and a switch to guitarist Serge Pizzorno on vocal duties for Take Aim introduced a slightly slower pace in proceedings and this followed on in the nostalgic reminiscence of British Legion. However, the band's usual fervour was never far away and they soon launched into the crowd-pleasing Empire, which had an enraptured crowd back in chanting-along mode. A rather brilliant cover of Fatboy Slim's Praise You acted as the introduction to iconic track L.S.F. whilst a rousing and impassioned performance of Fire ended the night, causing delighted gig-goers to jump up and down as one in the balconies.

The well-balanced set list of old and new songs perfectly suited the mixed audience of faithful fans and those who were there purely because they support the cause. Either way, when Meighan launched into an a cappella version of The Beatles' 'She Loves You' as the group took their final bow, there was no disputing that the Albert Hall this evening was filled with a lot of well-earned love for Kasabian.