Serge Pizzorno: 'T In The Park Birds Are Well Protected'

Kasabian Rocker Serge Pizzorno Has Assured Nature-lovers That Organisers Of Scotland's T In The Park Music Festival Have Done Everything In Their Power To Protect The Rare Birds Found On The Site. 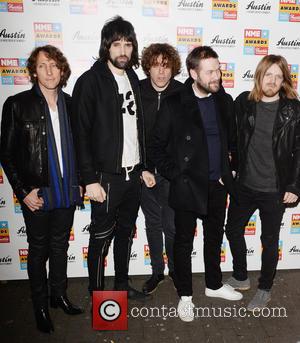 The future of the festival was thrown into doubt after rare ospreys were discovered on the Strathallan Castle site in Perthshire, and environmentalists campaigned to stop the event taking place amid fears it would interrupt nesting.

Bosses were finally given the green light for festival in May (15) but they had to move the main stage to protect the birds, and Pizzorno, who is set to headline the event with his band, admits he could not believe the news, telling Scotland's Daily Record newspaper, "We were on tour somewhere and someone was talking about T and it was mentioned that the whole thing might be off (because of the birds)... I actually thought the whole thing was a wind-up."

However, Pizzorno is confident festival officials have done everything they can to keep the birds safe, adding, "I can imagine the poor things, vibing out in their nest, having a nice, smooth day and then 80,000 people are there all of a sudden... Poor things. What are they gonna think?

"I'm sure everything that can be done will be done to make sure these birds are protected and not stressed by it because now it has been such a huge issue..."

T in the Park festival runs from 10-12 July (15) and will be its first at Strathallan Castle after spending almost two decades at Balado, near Kinross. Headliners also include Noel Gallagher and Avici.